Seoul, Korea: New Zealand has become the latest country to join the Asia Golf Leaders Forum (AGLF) with the South Pacific nation pledging its commitment to develop and expand women’s golf in the Asia-Pacific region.

Following a recent official Memorandum of Understanding (MOU) signing ceremony in Korea, Dean Murphy, Chief Executive of Golf New Zealand (GNZ), said: “We are excited that Golf New Zealand can contribute to the development of Asia-Pacific region’s golf, which has been spearheading world women’s golf business in recent years.”

Golf New Zealand, which has not been able to host a tournament for the past five years largely due to the Covid-19 pandemic, has agreed to host the New Zealand Women’s Open in 2024 and preparations for the event are already underway.

New Zealand’s much-developed golf infrastructure and industry have over 400 golf courses, currently ranked number one in the world, has also come through the ranks from New Zealand’s golf development programmes.

The R&A is also a special member of the AGLF, where they support their belief in the development of women’s golf in the Asia-Pacific region.

Paul Park, Secretary-General of the AGLF, said: “The AGLF’s mission is to unite all the Asian golf associations and create synergies to boost Asian golf to a global arena.

“Together with corporate partners, the AGLF is working to establish and grow Asia’s own series of women’s golf by co-developing with existing tournaments or establishing new tournaments in countries across Asia.” 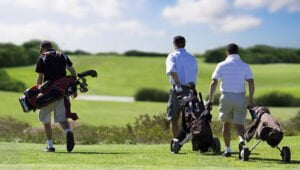 St Andrews, Scotland: A pioneering health initiative has been piloted in Fife with golf ‘prescribed’ for individuals to encourage a more active lifestyle.

St Andrews, Scotland: Major champion Michelle Wie West will align with The R&A to expand her golf career off the course and into the global development of the sport.

St Andrews, Scotland: The R&A has renewed and expanded its partnership with IMG, to create new commercial opportunities that drive long-term growth and support its wider strategy.

Singapore: The launch of a Danang Conference and the resumption of the Certificate in Greenkeeping programme were among the Asian Golf Industry Federation highlights in 2022.