Eric holds the position of CEO of The Asian Golf Industry Federation (AGIF) since late 2014.Under his stewardship, the AGIF has forged relationship with owners, club management and national and international golf federations to build turfgrass and club management education modules throughout Asia. The AGIF offers the Certificate in Greenkeeping for Turfgrass professionals in partnership with The R&A as well as facilitating the renowned Certified Club Manager CCM certification in partnership with the Club Management Association of America. The AGIF runs Seminars on Turf and Club Management events and has partnerships with national associations throughout Asia.

Born in Canada and raised in California, Eric holds a Bachelor of Arts, English Literature degree from U.C. Berkeley and an MBA from the Thunderbird School of International Management in Arizona. He has lived and worked in Asia for over 32 years in the media, sports and golf industries. 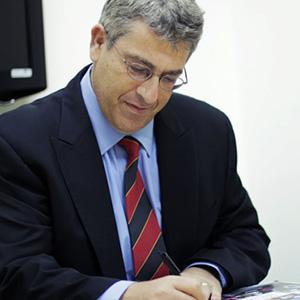 Having cut his journalistic teeth in England, Spencer arrived in Hong Kong in 1984 to assume a position on the editorial staff at the South China Morning Post, where he became Chief Sports Writer and Deputy Sports Editor. Instrumental in the launching and running of the first golf magazine in Asia, Spencer moved to Singapore in 2002 and has continued to be a close observer of Asian sport, writing for many leading newspapers, magazines and websites and commentating for a variety of television channels, including ESPN, Fox Sports and Asia Television (Hong Kong).

In February of 2014, Spencer assumed the position as Chief Communications Officer with the Asian Golf Industry Federation. As well as sitting on various Awards panels, Spencer has acted as moderator at numerous high-profile conferences around the region, including the Asian Club Managers Conference (2018), All That Matters (2017), HSBC Golf Business Forum in Abu Dhabi (April, 2014), and as Master of Ceremonies at various golf tournaments, including The Championship (European Tour-Asia Tour) and Causeway Trophy.